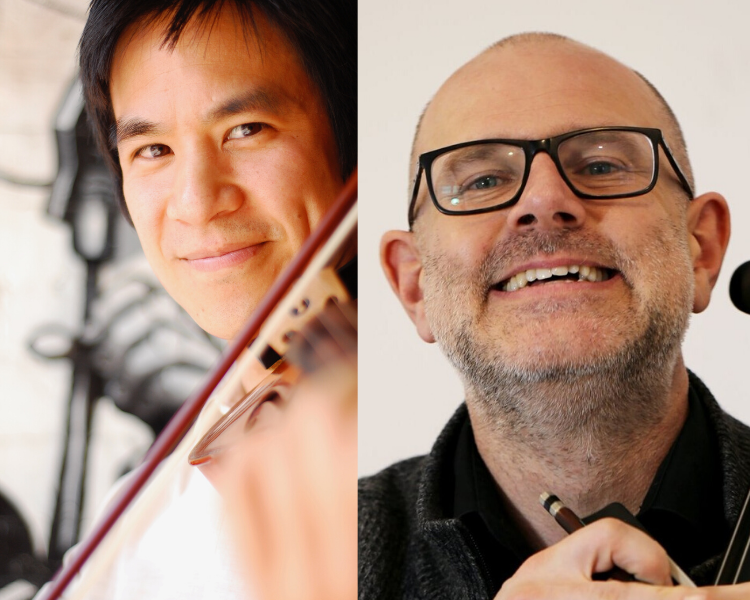 Two instruments, eight strings, the possibilities will surprise you! Founding member of INNERchamber, Artistic Director Andrew Chung and cellist Ben Bolt-Martin dive into the riches of the solo, and violin-cello duo repertoire with music from the Baroque to the present day.

Andrew Chung is a core member of London Symphonia, while also serving as Artistic Producer. He performs regularly with the Hamilton Philharmonic Orchestra, and the Stratford Festival Orchestra. Andrew spent a number of years living in Sydney, Australia, where he was performing with the Australian Opera and Ballet Orchestra at the Sydney Opera House. He has performed recitals in Australia and Canada, including appearances as part of Stratford Summer Music. On baroque violin, he has performed with Nota Bene Baroque Players, the Aradia Ensemble, and at the Grand River Baroque Festival. In 2010, Andrew started INNERchamber in Stratford, and is its Artistic Director.

Ben Bolt-Martin works as a cellist, composer and conductor. Ben teaches cello and chamber music at the University of Waterloo and is Principal Conductor of the Waterloo Chamber Players. He lives in Kitchener with his wife Liz.
Ben has played 19 seasons with the Stratford Festival, where he plays for live musical productions and has recorded incidental music for dozens of stage plays. Ben has also recorded for the Walnut Street Theater in Philadelphia, the Grand Theatre in London and for the Shaw festival, among others.
Ben performs with the INNERchamber ensemble. He was the featured performer on a disc of new works entitled “Notes Towards” which was nominated in 2009 for a Juno Award. As a solo performer, his focus is on works for solo cello written for him or by him, often involving electronically “looped” material and spanning a multitude of genres and traditions.